Definitely Wizards is a rules-light comedy/fantasy TTRPG about pretending to be a wizard created for ZineQuest3. All you need is a few friends (including a GM), a few d6's, a way to take notes, and a few hours to play.

Play as a party of non-wizard magic users in a world where only wizards are permitted to use magic. In order to get way through the Wizard Certification Practical Exam, a series of increasingly difficult chambers with puzzles to solve and/or monsters to fight. The core of the game is a balancing act- use your natural, non-wizard powers to survive the test, but not so much that you give away your secret.

This digital version includes the original 12 page rule book, plus a slightly abridged version you can print on a single page and fold into an 8 page mini-booklet.

Community copies are free to anyone who can't afford the game otherwise, no questions asked. Thanks so much to all my Kickstarter backers, and especially those who donated extra copies!

In order to download this game you must purchase it at or above the minimum price of $3 USD. You will get access to the following files:

Support this game at or above a special price point to receive something exclusive.

A full copy of the game, available to anyone who wouldn't be able to afford it otherwise. Feel free to grab one, no questions asked! These were sponsored by backers during the Kickstarter campaign, who I cannot thank enough for their support!

How do you fold the printables into a book?

The printable book is formatted to be folded like an eight page mini zine! I like this video but any instructions for an eight-in-one booklet or one page zine should get you the same results.

A fun little game that definitely lends itself to some very wacky scenarios.

Hey, I love your game, and have added it to GoodReads, as a publication.

I've added you as 'Elliott HT', I can get that changed if you'd like your full name, for instance.

This was an absolute blast tonight. This will be our standard one shot maker for the foreseeable future.

hello! i'm thinking of playin this game with my dnd group (we play virtually) and i was wondering if it would be okay to copy the PDF i already own and send it to them, instead of forcing them to buy it or take from the community copies pool. if not, i 100% understand, but i wanted to check first.

That's totally fine! As long as you're not like posting a link publicly for anybody to download from, or charging them money for it you're all good, thank you for asking though!

alright, thanks so much!

This looks really cool, came here after seeing this on YouTube:

Reply
Signal vs. Noise258 days ago

Last Saturday I had my first game session and we really had a blast! We were able to sit around a table again (after playing online exclusively for almost two years thanks to Corona). As we were only three people (yet nobody had played the game before), we decided to give the GM-less approach a spin, taking turns in describing the rooms.

It worked astonishingly well and especially the last room was super fun: A dungeon, objects needed to be organized in a particular pattern, the room had no gravity and an element of the room took control of a player’s mind and made them attack the rest of the party. I didn't even introduce the final challenge here because we already had enough going on:

A dusty skeleton, chained to the dungeon wall, took over the mind of one wizard who started attacking the others ("only one is worthy to become a true wizard. you must eliminate the competition!") while fighting in zero gravity. A chest on the floor contained an old parchment showing the skeleton with a torch in each hand and in its empty eye sockets. As soon as one player managed to stab the skeleton with the last torch (while the other two were still fighting), the skeleton turned to dust, screaming, breaking the spell and turning the gravity in the room back on. It was really a great showdown!

The players also enjoyed the judge, a very, very old scrawny magician with a long beard. A magic clipboard was hovering next to him with an animated quill, which kept taking notes during the exam (it made them a bit nervous, because they weren't able to spot what was being written down 😉).

I tried to use the exact same setup at an online convention a week later (because I'm totally lazy and it worked so well), but the game went a little bumpier this time. I failed to make it clear in the beginning that the rooms were randomly generated and the players kept trying to make sense of the particular room and the setup of the test, looking for deeper connections.

Even though I tried to emphasize that each room was a magical aptitude test, they sometimes tried to find mundane solutions to the puzzles first, before resorting to magic. But I still think everyone had a good time and there were some great, funny roleplaying moments.

Next time I'll either try to prepare the rooms in advance without the random tables to give the whole exam a more natural flow (maybe giving the rooms a common theme) to help people with immersion and role playing, or I will greatly expand the random tables (using a d20 instead) and go wild. ;)

Thanks for coming up with this great little gem!

I'm a children's librarian and run a kids' RPG club at my public library. We played Definitely Wizards last week and had SO MUCH FUN! This photo is from our session. All 12 kids and 3 game guides loved exploring the challenges.

My favorite part of our club is when all the groups come back together at the end and share their favorite moments from their games because it's always cool to hear about the different scenarios each group ended up in. This game had wildly different stories created at each table because we rolled the challenges on the spot instead of pre-planning them.

A lot of the kids are also looking forward to running the game themselves for parents and siblings after the club. 1000% would play again. Thank you for creating such a lovely game. 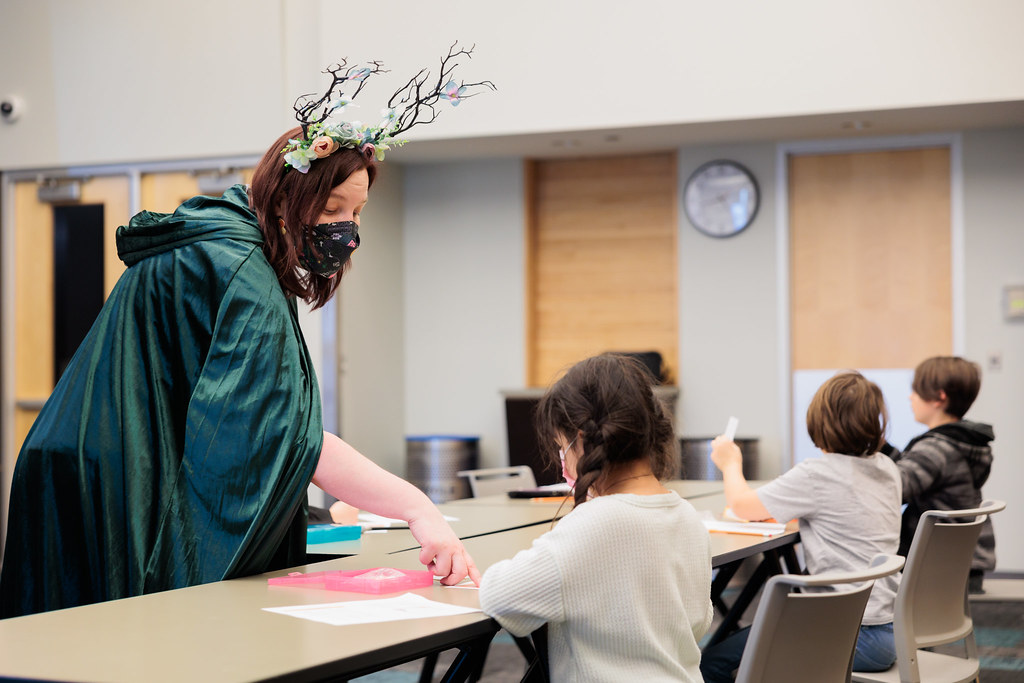 The cards were really helpful to get us playing quickly. We only have 1.5 hours for rules, character creation, and playing. I dealt two class cards and two prop cards to each player and they picked the one they wanted, which saved us a bunch of time and decision anxiety.

This is AMAZING, I’m so glad it worked out and y’all had fun! I am actually also a teacher n I had been thinking it might be cool to try with my kids in the future so it’s great to have evidence!

Definitely try it with them! I gave a copy to a kid who missed our session last week and she's thrilled to try it at home.

Played this with a few friends and had a blast. It's very evocative! Left you a review.

One minor rules point: it's possible for *both* your stats to reach 6. One way is if you have 6 in Wizard and 5 in Wild, then fail a Wild casting roll, which happened to us. Another is if you have a 6 and 5, and then cover for another character's failure (for example, if they're already on a 6 in Wild).

We weren't quite sure what should happen here - one option is that character simply can't cast spells any more! Another is that there's some kind of dramatic magical event and then both stats drop to 2. I'm not sure it's something that needs specific rules, just thought I'd mention it.

Thanks so much for the review, I'm glad you had fun! With the stat situation it's a little vague, but I included the props as a way to get out of that specific scenario.

Alternatively, if your group is down for higher stakes you could count it as an instant failure, and that characters magic explodes with enough force for a TPK. Or you could just lock that character out of magic for the remainder of the game. Whatever fits the vibes at your table best!

I just learned that reviews aren't public!? So I'm going to add that here as well.

Played this GM-less with a couple of friends over Christmas. Our game lasted around 2 hours (though we weren't exactly rushing) and was a lot of fun. We thought the art did a great job of setting the mood, and the character creation was a nice mix of simple and evocative.

It's quick to get into with minimal need to prep beforehand - as long as someone's read over the rules for spellcasting it'll be fine. No props or maps or anything are needed, just a way to roll dice.

The system is very light - it helps you generate the four parts of the Wizard Certification Practical Exam, then leaves you to it. This leaves the GM/group to decide how many separate challenges need to be overcome in a particular room, and judge when they've been overcome. We generally went with one successful roll per challenge (since failures often generate new obstacles) and that worked out well, with all of us teetering on the edge of exposure when we triumphed.

It was a great palate-cleanser between our usual longer-term games which are fairly crunchy. Our group wouldn't want to always play such freeform systems, but for a relaxing change of pace (or when some players can't make it) it hit the spot.

Who's it good for? We're all experienced GMs and found it comfortable enough as we're happy improvising and judging the level of challenges. As long as there's someone confident in the group either to GM or to support decision-making, you should be fine. We couldn't judge how it would be for an inexperienced group - I think it'd work well if they're happy treating it as improvised storytelling with the odd dice roll, but some might find the rules too light and want more support in terms of how many challenges, how many rolls, and when you've won.

We actually followed up by using our characters (and the system) to run Overdue, and found that it worked well; highly recommended.

If anyone wants to know how the game plays, I can't promise this is a correct version, but it is a podcast of our game.

This game is so wonderful and charming!! I know my friends and I will have a blast playing this. The concept is hilarious and all of the random tables are super helpful. There's so much love and humor put into this little game - it's one of my favorites from ZineQuest 3.

Really like the tri-color aesthetic and the booklet form! Looking forward to following you.

Quite cool and fun. I love it.

I made a few quick splashes of color and art from the main book on the micro-booklet. PM me if you want me to send it along to you.

Not sure how to PM on this site, but I'd love this!

Reply
A Smouldering Lighthouse1 year ago(+1)

This is so deeply charming and I love what you've done here. :) I also feel like we must have been channeling the same muse, because my twelve page one-shot RPG about magic users causing problems for themselves dropped like last week. Oh to find kindred spirits. <3 Looking forward to playing this soon.

Thank you so much!!! I'll have to yours out, magic users causing problems for themselves is always a good time!

Sounds cool i'll check it out 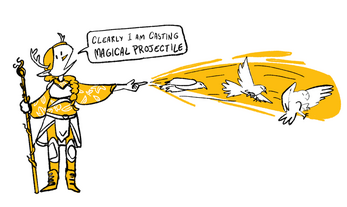 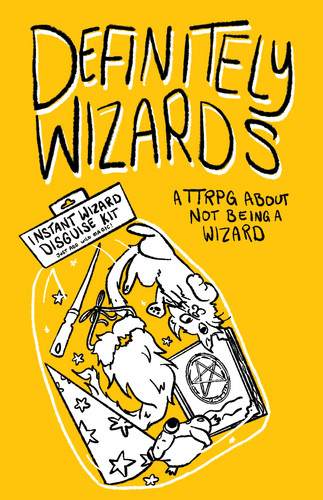 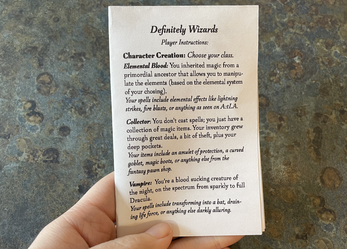 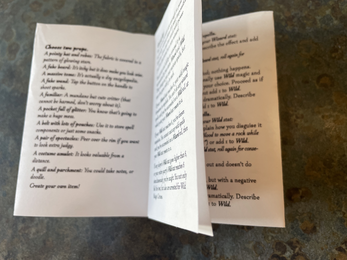 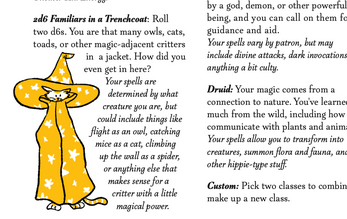